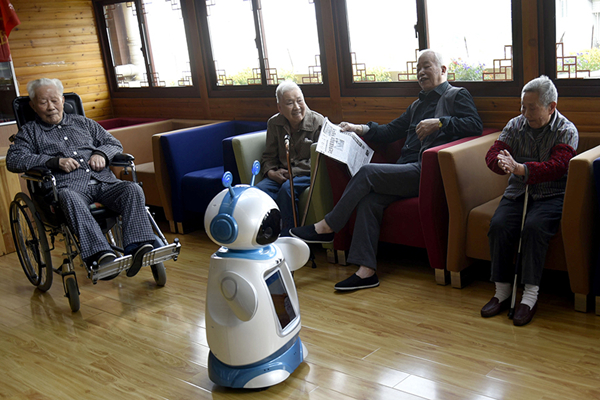 A nursing robot chats with senior citizens at a nursing home in Hangzhou, East China's Zhejiang province, May 17, 2016. [Photo/VCG]

A total of 29 provinces, municipalities and autonomous regions have proposed opening the elderly care service market, among which 26 regions said the market would open for foreign investment, Economic Information Daily reported.

China's State Council issued a circular in December 2016 to further reform the elderly care service industry, introducing private capital and innovating services to benefit the large population of elderly people in the country.

The circular called it a "sunrise industry", and put forward a target of opening the market by 2020.

Local governments followed suit and the pace of opening up became faster after the Ministry of Civil Affairs listed opening China's elderly care service market as a key task for this year.

In a bid to promote the rapid development of the market, a string of new policies are in the pipeline, the newspaper said.

A land resource system for elderly care service facilities is expected to be established to solve the land issue, an insider said. Furthermore, policies to support the reconstruction of idle resources will be unveiled.

In order to resolve the fund problem, special funds for elderly care are expected to be set up, and will use innovative financial methods, such as real estate securitization, to relieve finance stress.

The market is also optimistic about the public-private partnership mode. In the future, the country will use PPP to encourage social capital to actively participate in the elderly care market, the newspaper added.

"The PPP mode could reduce operating costs and financing for the development of the elderly care sector, raise the usage rate of idle resources and solve the problem of choosing sites," said Guan Bo, deputy researcher at the Institute for Social Development under the National Development and Reform Commission.