President Xi Jinping urged resolute efforts on Monday to contain the spread of pneumonia cases caused by a new strain of coronavirus as cases of the contagion rose to 224, all but six of them confirmed, as of 8 pm on Jan 20.

Xi, also general secretary of the Communist Party of China Central Committee and chairman of the Central Military Commission, made the remark in an instruction on the prevention and control of the disease.

All-out efforts must be made in the prevention and control of the contagion, Xi said, as he called for closer attention to related work.

Given massive population flows during the upcoming holiday of Chinese New Year, which falls on Jan 25, it is an urgent task to properly prevent and control the disease, Xi said.

He urged Party committees and governments at various levels as well as relevant departments to make people's lives and health a top priority, devise meticulous plans, mobilize all available resources and take concrete and effective measures to contain further spread of the sickness.

Every means should be tried to save and treat the infected, identify the cause of the contagion, strengthen case monitoring and standardize diagnostic procedures, Xi added.

He called for timely disclosure of outbreak information and a deepening of international cooperation.

Measures should be taken to guide public opinion, make relevant policies accessible to the public to uphold social stability and ensure people across the country enjoy a peaceful and happy festival, Xi said. 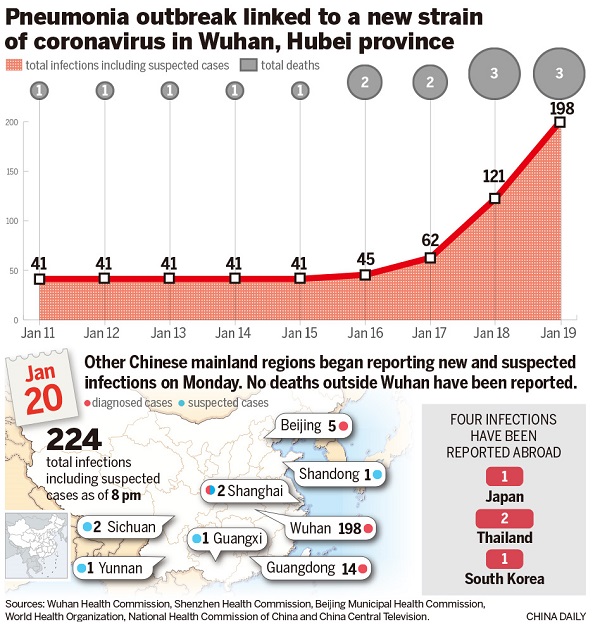 Li also called for good coordination with the World Health Organization, relevant countries and the Hong Kong and Macao special administrative regions and Taiwan province to take united action to resolutely prevent the contagion from spreading.

A State Council executive meeting chaired by Li on Jan 20 also worked out concrete steps to prevent and control the disease.

As of 8 pm on Jan 20 a total of 218 confirmed cases of novel coronavirus infections had been reported in China — 198 cases in Wuhan, Hubei province, where the first case of novel coronavirus infection was identified, five in Beijing, 14 in Guangdong province and one in Shanghai. Japan, Thailand and the Republic of Korea were also reported to have confirmed cases of the disease.

In line with the united prevention and control mechanism of the State Council, the National Health Commission has set up a leading task force group to cope with the outbreak while local governments — including the Hubei provincial government — were asked to shoulder their responsibilities in disease control.

Responding to a question about the outbreak on Jan 20, Foreign Ministry spokesman Geng Shuang said at a regular news conference that China had informed the WHO, organizations in relevant countries and regions about the disease in a timely manner, and has been in close communication with them.