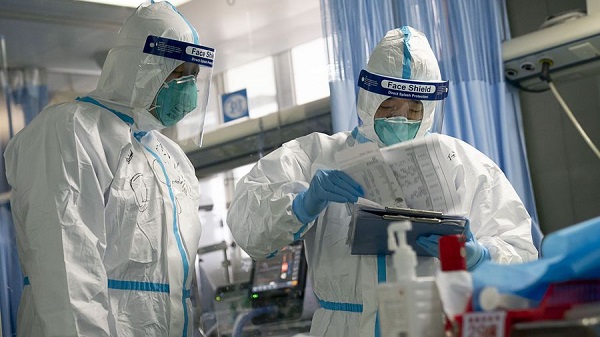 Front-line medical workers in Hubei province, including those with medical assistance teams from other parts of the country, will have their salaries tripled during the epidemic control fight, and subsidies for them will be further boosted, according to a document released on Sunday by the top leading group on the novel coronavirus prevention and control.

According to the document, front-line medical workers who have participated in epidemic prevention and control will be given preference in cases of getting promotions or applying for professional titles.

The circular also stressed that demand for protective equipment at designated hospitals, fever clinics and quarantine facilities must be prioritized.

Family members of medical workers who have difficulties in their daily lives will receive greater support, according to the circular. They will gain improved access to medical care, and community officials will be responsible for providing assistance to them, including their children.

China reported on Sunday another decline in novel coronavirus pneumonia infections outside the epicenter of the outbreak as health officials urged the public to remain alert amid the growing resumption of work activities.

The number of new cases outside Hubei province fell to 18 on Saturday, a small fraction of a high of 890 cases recorded earlier this month, Mi Feng, a spokesman for the National Health Commission, said on Sunday. He added that 16 provincial-level regions reported zero new infections for two consecutive days.

The sustained slowdown in the virus' spread has prompted an increasing number of businesses and factories to restart operations. More people have also ventured out to shopping malls and other public venues following many days of restricted movement aimed at reducing potential exposure to the virus.

"While production and public life is resuming, we should continue to implement prevention and control measures," he said. "The public is required to refrain from visiting places with large crowds, reduce nonessential trips and take effective preventive measures when leaving home."

Liaoning and Gansu provinces have both announced the scaling back of their emergency response from level one to level three of the four-tier system. Both regions have reported no new infections for at least five days.

Lin Duo, Party secretary of Gansu, said on Saturday that this did not mean the province was relaxing its control measures. Rather, the shift is aimed at striking a balance between fighting the virus and getting lives back on track, China National Radio reported.

Hubei registered 630 new infections on Saturday, up from 366 a day earlier but still running at a relatively low level, according to the National Health Commission.

Authorities in Wuhan, the provincial capital where the virus first emerged, said that as of Friday nucleic acid tests had been completed for all people who were confirmed to have the infection, suspected cases, close contacts and people displaying symptoms of fever, following last week's three-day campaign to conduct door-to-door screening of all residents.

Meanwhile, in a notice released on Saturday, the city government said patients who had been cured and discharged from hospitals in Wuhan should be quarantined at designated facilities for 14 days free of charge, in a bid to stamp out transmission risks and ensure the safety of recovered patients and their family members.

Nationwide, the cumulative number of infections stood at 76,936 as of Saturday, and a total of 22,888 patients have recovered and been discharged from hospitals.

The mainland death toll rose by 97 cases to 2,442 on Saturday, with only one fatality outside Hubei, in Guangdong province.

Front-line medical workers are among those who have fallen victim to the outbreak, such as Liu Zhiming, president of Wuhan Wuchang Hospital, and Peng Yinhua, a young doctor in Wuhan who had postponed his wedding to treat patients.