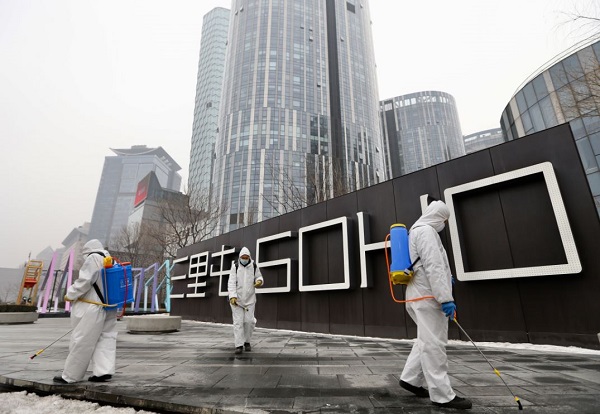 Beijing has rolled out more epidemic control and prevention measures to strengthen containment of the novel coronavirus outbreak and ensure the safe and smooth resumption of work by detecting infections at hospitals and workplaces.

According to the Beijing Daily, top municipal officials said on Friday that the risk of the virus spreading in the capital remains high as more people return to work, with hospital infections in the capital, which attracted a lot of attention last week, highlighting the need for more stringent measures to prevent infection.

Thirty-six people, including 19 patients and their relatives, have contracted the virus at Fuxing Hospital, a major hospital in Beijing's Xicheng district, a news briefing was told on Feb 20.

On the same day, a senior official from Peking University People's Hospital said a patient in the hospital's geriatric department had been infected with the virus. Twenty-two people, including geriatric ward inpatients and medics, were put under medical observation.

Two relatives of the confirmed patient were also confirmed as being infected.

"I feel deeply guilty and full of remorse about the cluster infection that happened in the hospital," said Li Dongxia, president of Fuxing Hospital affiliated with Capital Medical University on Feb 20.

The hospital had implemented closed management for 14 days starting Feb 5, and a thorough disinfection had been conducted.

In the Peking University People's Hospital case, the hospital's fever clinic diagnosed two people as being infected with the novel coronavirus on Feb 17. The couple had frequently visited the mother of one partner, who was hospitalized in the geriatric department.

Since the patient had gone through renal dialysis, up to 142 patients in the ward who underwent hemodialysis had been put under quarantine, Liu Xiaoguang, deputy director of the hospital's medical department, said.

Some hospitals in Beijing had earlier prohibited relatives from visiting inpatients. Starting Tuesday, patients will need to make an online appointment to see a doctor in third-class and second-class hospitals in the capital.

Beijing's municipal authorities have called for grassroots prevention efforts, with hotlines opened for the public to supervise epidemic control work, according to a meeting on controlling the epidemic chaired by Beijing Party Secretary Cai Qi on Friday night.

To ensure the safe resumption of work, companies are being required to enhance intervention, apart from the rule implemented earlier requiring all returnees to isolate themselves for 14 days at home or designated sites.

On Saturday, a staff member at Dangdang, an e-commerce company in Chaoyang district, was confirmed as being infected, leading to 66 co-workers being placed under quarantine.

"We summoned the company's heads to inquire about the situation and carried out a complete examination of the buildings," Zhang Yanlin, deputy director of the Beijing Municipal Development and Reform Commission, said Feb 22.

The epidemic in the capital has showed signs of slowing recently, with new confirmed cases in the single digits. Saturday was the first day the capital reported no new infections.

"But there is no reason that we can take it lightly when containing the outbreak," Pang Xinghuo, deputy director of the Beijing Center for Disease Control and Prevention, said Feb 23.