When Wuhan was in need, help came from close and afar

The first group of medical assistance teams departed Wuhan, Hubei province on Tuesday as the COVID-19 situation markedly improved in the hardest-hit Chinese city, a pivotal and priceless progress that would have been impossible without the help of medical teams from across China.

In all, over 300 medical teams had rushed to the rescue of Hubei province, with over 38,000 medical workers going to Wuhan. Xu Yinghui, head of the medical team of Liaoning province, was one of them.

When Xu first learned of his rescue mission, it was so urgent that "we had no idea where we would go at the beginning," he said. But the whole team jumped into preparation. They didn't learn of their departure time and destination until a Saturday afternoon in early February. And his team -- 500 medics, on board four charter flights with over 4,000 boxes of materials -- arrived there in the wee hours of Sunday morning, less than 15 hours later.

Their destination was Wuhan, or more precisely its nearly finished Leishenshan Hospital. Welcoming them on the site were over 10,000 workers toiling around the clock to build it from scratch and make it ready for operation. Only two wards were available at that moment, without any equipment or devices in them.

"We started to work along with the workers to prepare wards," said Shang Dong, one of Xu's team members. After three days of frenzied activities, on Feb 12 the team began to receive patients and later took charge of 17 sections of the hospital.

The hospital has in all 32 sections, staffed with nearly 2,600 medics from 12 teams made up of medical forces from 189 hospitals around the country.

"The hospital has a leading group and six working groups with specific responsibilities," said Xu from Liaoning.

Leishenshan was not the only site of such concerted medical rescue efforts.

A national team from the central government and another medical team from Shanghai, for example, were dispatched to help the Jinyintan Hospital in Wuhan, a local specialty hospital that handles infectious diseases.

Another team from China’s far western autonomous region of Xinjiang was stationed at a makeshift hospital, in the city's Dongxihu District, while eastern China's Jiangxi province deployed its medical team to the Fifth Hospital in Wuhan. 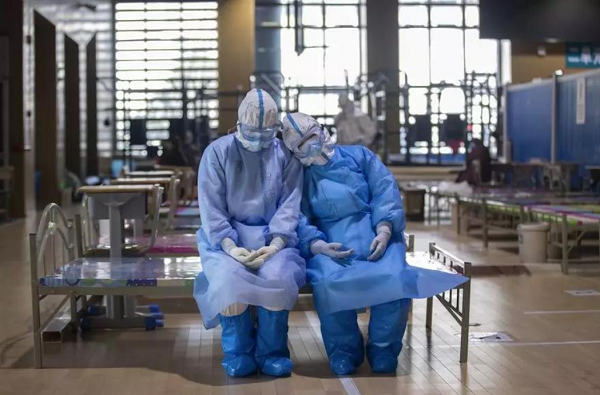 Two medical workers take a break at a makeshift hospital in Wuchang district. [Photo/provided to en.nhc.gov.cn]

Elsewhere at the Tongji Hospital in Wuhan, after 48 hours of collective efforts, medical forces from Beijing and Jiangsu had successfully set up a new ICU ward along with the local staff, racing against time to help more critically ill patients. It received 18 patients on its first night. 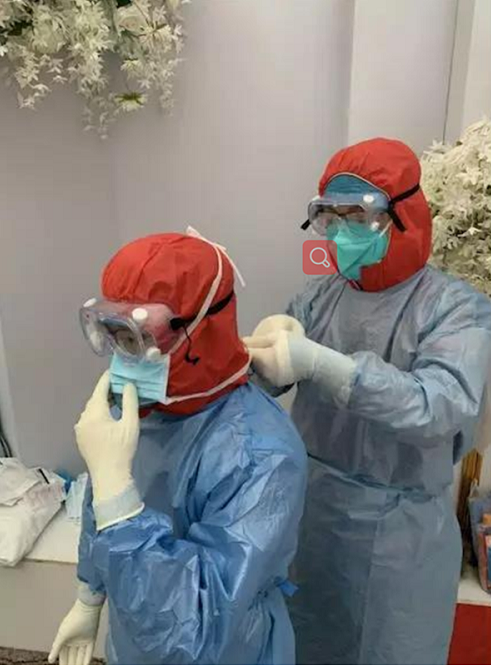 Medical workers help each other put on protective suits. [Photo/provided to en.nhc.gov.cn]

Medical devices were also desperately needed in Wuhan, and that was why a team from Shanghai had brought along their best equipments, including extracorporeal membrane oxygenations (ECMO), invasive and non-invasive ventilators and hemodialysis devices.

The team from the China-Japan Friendship Hospital even sent a request to its headquarters in Beijing to send along more devices. Immediately transport vehicles were arranged and overnight the needed devices were delivered, from almost 1,200 kilometers away.

It was through such joint efforts by the medical forces from across China that Wuhan was finally able to pull through its worst days. On Feb 20, Wuhan for the first time had more people recovering from the virus than new patients falling sick from it on any given day. This Tuesday witnessed only one new infection in the city. On Wednesday, it was zero.

The fight continues, yet now there is light on the horizon.