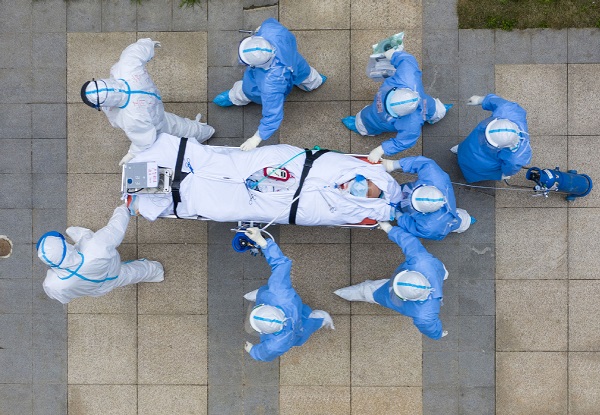 The death toll caused by COVID-19 in Wuhan has been amended to 3,869 by April 16, and the confirmed infections total 50,333, according to a notification released by the Wuhan epidemic prevention and control center on April 17.

The fatalities are up by 1,290 compared with the previous reported figure of 2,579, and the number of confirmed cases saw a small increase of 325.

The notification said the increase was due to a comprehensive examination and verification of figures from various departments such as funeral parlors, medical institutions, public security authorities and communities in Wuhan, the city hit hardest by the novel coronavirus in China.

In the early stage of the outbreak, a rapid rise in number of patients and quick spread of the disease overwhelmed the city's medical system, making data collecting difficult.

Now the transmission of the disease has been basically contained and the lockdown of the city been lifted, which makes it possible to look back and comprehensively reexamine the data to ensure its accuracy, according to an official in charge of the matter.

Such a practice is based on relevant Chinese laws and regulations, and conducted under the principle of "being responsible to history, the people and the deceased", the notification said.

In late March, the Wuhan headquarters established a special group working on data verification, which has extensively examined and closely compared statistics from various sources to make sure every single person affected is counted.

The verification found that some data reporting was delayed or was not accurate in the early stage of the outbreak, so the numbers should be amended according to relevant Chinese laws and regulations, the notification said.

In the early stage, the capability of nucleic acid testing and medical resources was very limited in the city, so some patients died at home without being treated. Medical staff was too busy to treat patients so there had been some delayed reporting. Also, as various types of medical institutions were used to admit COVID-19 patients, a few of them had not been linked with the online direct reporting system.

These all resulted in the inaccuracy of initial statistics, according to the notification.