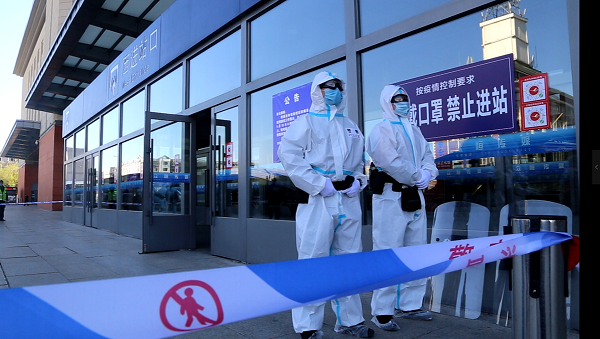 The Jilin Railway Station is closed temporarily on Wednesday in the aftermath of COVID-19 cluster infections. [Photo by Zhao Wenbin/For chinadaily.com.cn]

China is facing large challenges unprecedented in recent times given the grave situation of global disease prevention and the slowdown of the world economy, according to a key Party meeting on May 15.

During the meeting of the Political Bureau of the Communist Party of China Central Committee, participants discussed the draft of the Government Work Report to be submitted to the Third Session of the 13th National People's Congress. Xi Jinping, general secretary of the CPC Central Committee, presided over the meeting.

The report will be deliberated and approved by the country's lawmakers during the annual session that will start on Friday.

According to the meeting, the government should fulfill its duties under the strong leadership of the CPC Central Committee with Xi at the core, and implement the Party's strategic deployments regarding national development, so as to better face up the challenges.

The meeting stressed the importance of coordinating disease prevention and economic development with a focus on this year's task of building a moderately prosperous society in all respects.

The government should push forward supply-side structural reform and promote high-quality development driven by reform and opening-up while making regular disease prevention and control measures a priority, according to the meeting.

More efforts should be made to ensure priorities in the areas of employment, people's livelihoods, the development of market entities and food and energy security, according to the meeting.

The strategy of expanding domestic demand should be further implemented to maintain economic development and social stability and fulfill the goal of eradicating poverty across the country, the meeting said.

Since the novel coronavirus outbreak, the CPC Central Committee has made disease prevention a top priority, and Xi has personally commanded the battle against the disease and put the people's health in first place, according to a statement released after the meeting.

With strenuous efforts, the battle to defend Wuhan and Hubei province has seen decisive outcomes, and great strategic progress has been made in disease prevention, the statement said.

The government will remain alert on disease prevention and control, especially during the rest of the year, and it will create more positive fiscal policies and more flexible monetary policies, according to the meeting.

The employment-first policy should be further implemented, with more macro policies taken to stabilize enterprises and secure employment, according to the meeting.