Chinese researchers have published data collected from samples of the coronavirus that caused the latest COVID-19 outbreak in Beijing and shared it with international organizations. 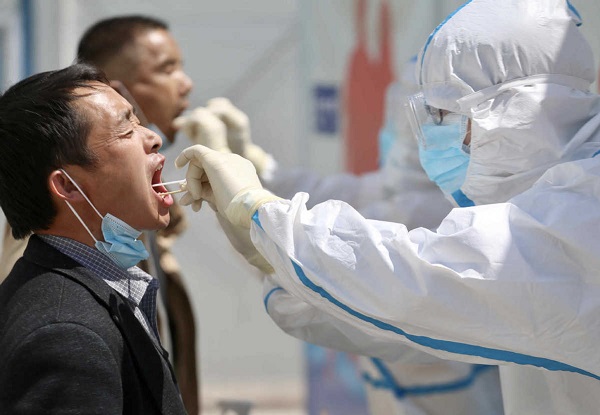 The data, published on June 18, is from virus samples collected from confirmed cases and the environment at Xinfadi, a major wholesale market in Beijing linked to the outbreak. The genome sequence data has also been submitted to the World Health Organization and the Global Initiative on Sharing All Influenza Data so it can be shared with the international community, China's Center for Disease Control and Prevention said.

The data is published via a data service system, jointly established by the Chinese Academy of Sciences and China's CDC.

Beijing reported another 25 confirmed COVID-19 cases on Thursday, bringing the total number of confirmed cases to 183 in the latest outbreak, which was detected on June 11. Previous to the outbreak, the city had reported no new confirmed local cases for nearly two months.

Although efforts are underway to trace the source of the virus in the outbreak, initial analysis showed the virus strain was from Europe, but it is older than the existing strains in prevalence in Europe at present, according to a CDC researcher.

"There may be different possibilities for importation of the virus," said Zhang Yong, assistant director of the National Institute for Viral Disease Control and Prevention of the CDC, in a report published by National Supervisory Commission.

"The virus may have been lurking in imported frozen food, so it did not evolve during transportation from overseas due to freezing conditions," he said. Another possibility is that the virus was lurking in dark and humid conditions such as at the Xinfadi wholesale market and suddenly was exposed to humans, causing the outbreak, he said.

Following the report of the outbreak on June 11, experts from the institute collected hundreds of samples from Xinfadi and many tested positive for the novel coronavirus. Some cutting boards for salmon sold in the market tested positive, authorities in Beijing have said.

"The fact that a number of samples collected at the market tested positive for the virus indicates that the virus has remained in the market for quite a while," Zhang said. "However, we need to find more evidence."

Liu Jun, a researcher at the institute, said cold and humid conditions in the seafood market in Xinfadi help the virus survive and spread, which explains why a number of confirmed COVID-19 cases were reported there. However, the fact that the virus broke out at the market does not lead to the conclusion that the virus originated in the market, he said.