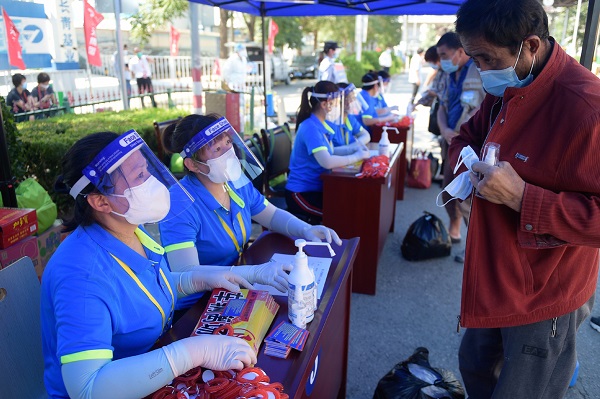 A man registers to retrieve his personal belongings and vehicle at a quarantine site for personnel related to the Xinfadi market in Beijing, on July 7, 2020. [Photo/Xinhua]

Beijing reported no new confirmed local cases of COVID-19 on Tuesday, which means the city had zero new cases for two days in a row, said Xu Hejian, spokesman for the municipal government, at a news conference on July 8.

No new suspected or asymptomatic cases were reported, and 13 people were discharged from the hospital after recovery on Tuesday, according to Pang Xinghuo, deputy head of the Beijing Center for Disease Control and Prevention.

From June 11 to July 7, the city reported 335 confirmed local cases, of whom 307 are still hospitalized and 28 were discharged from the hospital after recovery, Pang said.

There were 31 asymptomatic cases under medical observation, according to the Beijing Municipal Health Commission.

By Wednesday, there was one community that was designated high-risk, with 18 others deemed medium-and low-risk citywide.