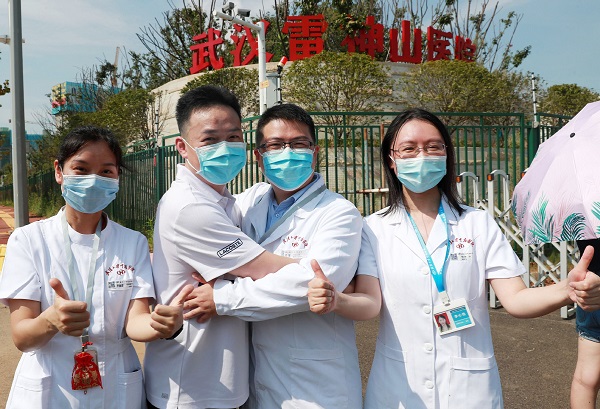 Governments at all levels and related departments should put people first, build a strong team of medical workers and improve the environment of respecting medical workers in the whole of society, he said in an instruction given on China's Medical Workers' Day.

Li said that he hoped medical workers will consistently improve their skills and the quality of services to make a new contribution to the building of a healthy China and guaranteeing people's health.

Also on Wednesday, a symposium celebrating this year's Medical Workers' Day was held at the Great Hall of the People in Beijing.

Delivering a speech at the symposium, Vice-Premier Sun Chunlan said that since the start of the novel coronavirus pandemic, large numbers of China's medical workers have put themselves forward and made outstanding contributions to achieving progress in epidemic prevention and control.

This has fully shown the dedication and superb skills of the country's medical workers, Sun said.

The majority of the 80 recipients of this year's Chinese Physician Prize－the highest honor for the country's medical workers－have participated in fighting the COVID-19 epidemic on the front line, according to the Chinese Medical Doctor Association, which released the list on Wednesday.

The association said that a number of courageous and selfless medical workers have braved danger and committed themselves to battling the virus amid the outbreak, including renowned clinical experts and grassroots doctors.

According to the list, over 30 winners battled the pandemic in Wuhan, Hubei province－the city hit hardest by the virus in China, and more than 20 of them were sent from other regions to assist the city's fight.

One of the them is Zhang Dingyu, president of Wuhan Jinyintan Hospital and deputy director of Hubei Provincial Health Commission. As an amyotrophic lateral sclerosis patient himself, Zhang has earned widespread respect for steadfastly remaining at his post, although his disease has rendered both his legs increasingly powerless and will eventually paralyze him.

Zhang Wenhong, head of the infectious disease department at Huashan Hospital in Shanghai, also received the honor. As the leader of the Shanghai expert team for the treatment of COVID-19 cases, Zhang is beloved by the public for his frank and accessible style of speaking and has been praised for his role in spreading scientific knowledge about the virus.

Guo Yanhong, an official with the National Health Commission's medical administration and supervision bureau, said that various disease prevention and control measures must be resolutely implemented to solidify the hard-won achievements in curbing the virus, and to win a decisive victory against the epidemic.