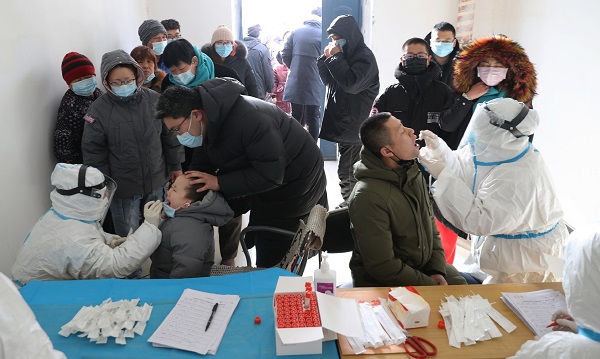 - The origin of the latest outbreak in Hebei province has not yet been identified, and epidemiological investigations are underway.

- The total confirmed local COVID-19 cases in Hebei stand at 127, along with 183 asymptomatic cases.

- Nine communities and villages in Shijiazhuang have been designated as medium-risk areas.

- Among the newly confirmed cases, 31 were reported in the provincial capital of Shijiazhuang. Also, 35 of the asymptomatic carriers were found in Shijiazhuang.

- Five communities and villages were designated as medium-risk areas on Friday morning in Nangong city, Xingtai.

Shijiazhuang, capital of Hebei province, has been put under a lockdown after the city reported the highest daily COVID-19 case numbers since the outbreak occurred over the past weekend.

The province reported 51 new locally transmitted COVID-19 cases on Thursday, bringing the total number of confirmed cases to 90 in Hebei, the provincial health commission said on Jan 7. Another 69 asymptomatic carriers were also found.

Among the newly confirmed cases, 50 were reported in the provincial capital of Shijiazhuang. Also, 67 of the asymptomatic carriers were found in Shijiazhuang.

"All residents and vehicles are not allowed to leave Shijiazhuang and residents' movements within the city will be limited," Meng Xianghong, vice-mayor of Shijiazhuang, said on Thursday night at a news conference on epidemic control.

Many flights to and from Shijiazhuang have been canceled since Thursday morning. Railway stations have stopped selling tickets, while long-distance buses are suspended, Mi Zhiqi, head of the city's transport bureau, said at the conference.

Vehicles are not allowed to enter or exit except for those transporting daily necessities or medical materials.

The cases in Shijiazhuang are mainly in two villages in Zengcun town, Gaocheng district. But the contacts are widely spread across five districts in downtown Shijiazhuang and 10 other counties and districts, Meng said.

In Gaocheng district, the country's only high-risk area for the virus, locals are not allowed to leave, Meng added.

Three officials there have been punished for dereliction of duty in COVID-19 prevention and control after a resident tested positive on Jan 3, according to the city's top anti-corruption authority.

To understand the scale of the outbreak, Shijiazhuang started universal testing on Wednesday. By midday on Thursday, it had collected over 6 million samples, more than 2.4 million of which have been tested, with 11 samples testing positive.

For treatment, the Shijiazhuang Fifth Hospital has been cleared exclusively for COVID-19 patients, and another three hospitals are preparing, Meng said. A total of 49 medical experts have been deployed, Meng said.

Currently, all the patients are in stable condition, she added.

Early investigations into 51 new cases on Thursday show that the earliest symptoms were detected on Dec 20 and that many of the infected had attended gatherings, including weddings.

"The cluster of infections in Shijiazhuang has been around for a while because some patients have tested positive for antibodies which means they have been infected for about a week," Lu Hongzhou, a professor at Shanghai Public Health Clinical Center, said during a television interview.

With the testing expanding, Xingtai, another city in Hebei, reported two confirmed cases on Friday, increasing its total to nine cases. The city is also carrying out citywide testing for COVID-19.

In order to reduce COVID-19 infection risks in the capital, Hebei has asked residents not to travel to Beijing unless absolutely necessary.

People who need to travel to Beijing must provide a negative nucleic acid test result within 72 hours before entering the capital.