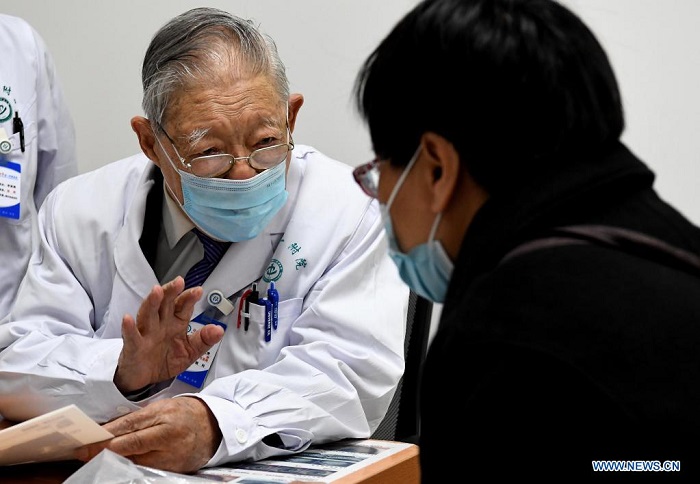 Zhang Xiaofang diagnoses a patient at the First Affiliated Hospital of Zhengzhou University in Zhengzhou, central China's Henan Province, on April 27, 2021. At 101, ophthalmologist Zhang Xiaofang continues to treat patients with an unwavering spirit as people queue up at his clinic in Zhengzhou. [Photo/Xinhua]

ZHENGZHOU -- At 101, ophthalmologist Zhang Xiaofang continues to treat patients with an unwavering spirit as people queue up at his clinic in Zhengzhou, capital of central China's Henan province.

A renowned ophthalmologist at the First Affiliated Hospital of Zhengzhou University, Zhang sees patients every Tuesday as long as his health permits.

The waiting room is always packed with patients, and he barely has any time to have a sip of water during the visiting hours.

"The patients come all the way here to see me, I would feel sorry if I can't treat them well," said the centenarian.

Zhang is the founder of intraocular foreign body research in China and an academic leader in eye injury treatment. He joined the Communist Party of China (CPC) in 1980.

This year marks the 100th anniversary of the founding of the CPC. Over the past century, Zhang has witnessed as well as participated in the development of China's healthcare.

Born in a doctor's family in 1920, Zhang often accompanied his father to work.

"It was fascinating to see patients in pain leave with satisfaction following treatment," said Zhang, adding that this inspired him to become a doctor.

The desire to treat and save lives further strengthened after 1937, when Japanese troops launched a full-scale invasion against China. Two years later, Zhang was admitted to what is now the College of Medicine, Zhengzhou University.

As someone from a humble financial background, he could barely afford stationeries so he found his own unconventional solutions. He would pin rough papers to make notebooks, turn fabric dye into ink and sharpen a wood stick to use as a writing pen after dipping it in the colored water. He got up early every day to study and continued studying until late in the dim light at night.

"We studied very hard simply to serve and save the country," Zhang said recalling the childhood days. They also had to move with the school from time to time to shun warfare.

At that time, the young CPC was leading the nation to fight the invaders. Many students, including two of his classmates, joined the Party.

"From them, I learned about the Party's call for the Anti-Japanese National United Front, as well as heroes such as Yang Jingyu and Zhao Shangzhi. I was particularly inspired," said Zhang.

Yang and Zhao were both CPC members who led the fight against the Japanese invaders in northeast China and were killed in the war.

In 1949, when the People's Republic of China was founded, Zhang was already head of ophthalmology in a hospital. On holidays, he, together with several young doctors, would ride bicycles to the countryside, factories and schools to offer free clinical treatment.

They found that many people had eye diseases such as trachoma, with many ailing with its complications and sequelae.

"If they were administered proper treatment, blindness could be completely avoided," said Zhang.

With the country forging toward industrial development in the 1950s, an increasing number of workers suffered from eye injuries caused by improper industrial operations or accidents.

Foreign objects such as scrap iron and copper sometimes led to blindness if they were not taken out of the eye in time. After countless setbacks and sleepless nights, Zhang developed some safe, simple and effective methods to locate and remove intraocular foreign bodies named "Zhang Xiaofang methods," including a grid method.

Zhang has turned down multiple offers from foreign universities.

"I gained all my experiences in China. I want to give back to the country where I was born and raised," he said.

Zhang submitted 17 applications for joining the CPC and became a Party member in 1980.

"Having lived in a war-torn country, our generation knows better that people cannot live a good life without a prosperous country and a great Party," he said.

After becoming a Party member, he felt more responsible for his patients. He would explain the cause, treatment and precautions in detail, spending an average of 40 minutes with each patient.

"Doctor Zhang is very meticulous in treating people. He is really patient whenever he is asked questions," said a patient surnamed Wang.

After the reform and opening-up in the late 1970s, China witnessed a leap in economic and social development. It has become the world's second-largest economy, contributing more than 30 percent to global economic growth for years. The quality of people's lives, as well as healthcare, has significantly improved.

Zhang said that when he first joined the workforce, there were only a few slit-lamp microscopes in Henan, which could solve very limited ophthalmic problems.

"Now, we have the world's most advanced equipment and can carry out all the cutting-edge treatments," said Zhang with a sense of pride.

As the founder and editor-in-chief of a journal on ocular trauma and occupational eye disease, Zhang insists on personally reviewing and editing every article.

"I've never thought of retirement. I feel happy as long as I have work," said the ophthalmologist. Enditem