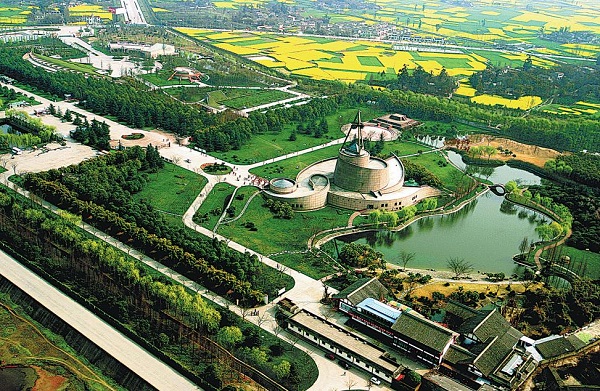 The Sanxingdui Museum in Guanghan, Sichuan province. The venue mainly displays exhibits discovered at the Sanxingdui Ruins, a nearby archaeological site of the ancient Shu civilization some 2,800 to 4,800 years ago. The civilization is known for its peculiar-shaped bronze and golden masks, among other ivory and bronze ware. YU JIA/FOR CHINA DAILY

Southwest China's Sichuan province is a hot land full of the "Red genes" and the revolutionary spirit.

Sichuan people have inherited the genes and the spirit of struggle to promote all-around high-quality development, said Peng Qinghua, secretary of the Sichuan Provincial Committee of the Communist Party of China.

During the epic Long March in the 1930s, CPC-led Red Army soldiers climbed many dangerous snowcapped mountains and walked across the equally treacherous wetland in Sichuan, leaving behind stories of heroism.

Crossing the Dadu Bridge on the Dadu River in Sichuan was to be one of the most critical actions of the Long March.

Kuomintang leader Chiang Kaishek had hoped the Red Army would repeat the tragedy of Shi Dakai by the river.

Shi, one of the brilliant generals of the Taiping Rebellion that severely shook the rule of the Qing Dynasty (1644-1911), China's last feudal dynasty, reached the river with his soldiers in May 1863.

Due to a sudden surge in the water level of the Dadu caused by a rainstorm, Shi and his men were blocked in the south of the river and surrounded by Qing soldiers. To save his soldiers from death, he went to the Qing military camp, pledging to sacrifice his own life.

While 4,000 Taiping soldiers were disbanded and sent away by the Qing military, some 2,000 were killed, and Shi himself was sent to the Sichuan provincial capital of Chengdu to be executed with a thousand sword slashes.

When the Red Army came to the Dadu that same month 72 years later, the current was too swift, and the progress of ferrying the soldiers in four boats was too slow.

The Red Army soldiers marched an exhausting 120 kilometers in a single day on May 28, 1935. At 6 am the next day, they reached the west bank of the Luding Bridge on the Dadu and found the planks had been removed by Kuomintang troops, with only 13 iron chains remaining.

Under the cover of cannons and machine guns, 22 soldiers accomplished what had originally appeared to be an impossible mission. They clung to the iron chains of the bridge, laying planks on it under intense machine-gun fire from Kuomintang troops on the other side of the bridge.

With several soldiers becoming injured and falling into the ferocious river, they crawled ahead on the planks they had laid, firing gunshots and launching a torrent of grenades until they finally took control of the east bank.

When Mao Zedong met Edgar Snow－the journalist from the United States who wrote the book Red Star over China－in Yan'an, Shaanxi province, in 1936, Mao said the Red Army's crossing of the Dadu was the most important event in the Long March.

If the crossing had failed, the Red Army might have been wiped out, he said.

Surrounded with mountains, Sichuan was inaccessible in ancient times, and its people have been known for enduring hardship.

Thanks to the "Red genes" and the spirit of struggle, Sichuan's GDP increased from 2.39 trillion yuan in 2012 to 4.86 trillion yuan ($760 billion) last year, and the goal of building a well-off society in an all-around way is in sight, according to Peng.

The contribution rate of science and technology to Sichuan's economic growth rose from 48.9 percent in 2012 to 60 percent last year, he said.

Sichuan has continued to narrow the economic development gap between different regions and between urban and rural areas.

Using the construction of the Chengdu-Chongqing Economic Circle as strategic guidance, the province has accelerated development of the Chengdu Plain, Southern Sichuan, Northeast Sichuan and Panxi economic zones, as well as the Northwest Sichuan Ecological Demonstration Zone. Moreover, its urbanization rate of permanent residents increased from 43.5 percent in 2012 to 55 percent last year.

Sichuan considers poverty alleviation to be its greatest political responsibility and livelihood project, with 6.25 million rural poor people being lifted out of poverty, and 88 counties having bucked their poverty-stricken titles.

From 2012 to last year, the annual average growth rate of urban and rural residents' income in the province was 8.9 percent and 10.4 percent, respectively, Peng said.

Sichuan has enhanced exchanges and cooperation with countries and regions along the Belt and Road Initiative, and 364 Fortune 500 firms have landed in the province, he said.

Sichuan's total import and export volume has had a two-digit growth for four consecutive years. It is accelerating its transformation from the hinterland to the frontier of opening up to the outside world, he said.

According to Liu Xiangchao, an official with the Sichuan Provincial Department of Commerce, the province's total import and export volume skyrocketed from about $100 million in 1981, soon after China adopted its reform and opening-up policy, to $117 billion in 2020.

Sichuan has been dedicated to the construction of ecological barriers in the upper reaches of the Yangtze and Yellow rivers, and it has implemented major projects for protecting and repairing important ecosystems.

It has also developed its green low-carbon circular economy. Its forest coverage rate increased from 35.3 percent in 2012 to 40 percent in 2020, Peng said.

Lying in the upper reaches of the Yangtze, Sichuan is the hometown of former Chinese leader Deng Xiaoping, chief architect of China's reform and opening-up policy. Covering 486,000 sq km, the province makes up 5.1 percent of the nation's total area.

In addition, the overwhelming majority of China's pandas are in Sichuan, and archaeologists at the Sanxingdui Ruins in Guanghan have unearthed alien-like bronze ware providing rare resources for those researching the Bronze Age culture in China.